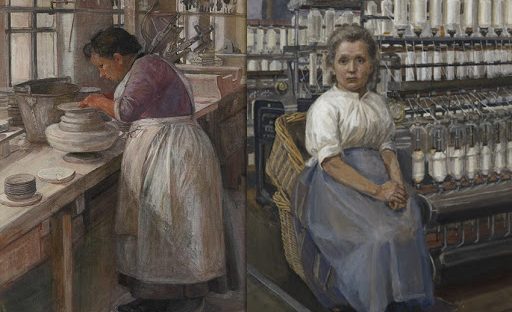 Centenary celebrations of women's right to vote and a Suffragette's artistic talent.

February 6th will mark 100 years since women over 30 gained the right to vote for the first time, with the coming of the Representation of the People Act.

With Sylvia Pankhurst set to be honoured by the city of London with a statue in her honour, the Manchester Art Gallery is showing examples of her artistry as part of the Edwardians display. Pankhurst trained at the Manchester School of Art, and in 1901 won the prize for best female student, and went on to start a scholarship at Royal College of Art in London.

Pankhurst was a large part of the Suffragette movement, along with her mother, and went on to be an antifascist campaigner in the 30’s and 40’s. She used her artistry to her advantage in her work the the Women’s Social and Political Union, drawing her own propganda in the forms of posters and leaflets, and even decorations for their meeting halls.

It was in this time of her life that Sylvia had to choose whether she dedicated her life to art, or to the campaign for women’s right to vote. She managed both for a few years but by 1912 she had made her decision.

Art had lost an amazing artist, but the Women’s Vote cause gained a passionate woman. However, the obvious talent she had which today speaks for itself, is living on in the Manchester Art Gallery for us all to admire. How lucky we are.

The art on show depicts the stories of women hard at work Pankhurst met as she travelled around England and Scotland in 1907. They show women in pottery, shoe-making, fishing and spinning industries just to name a few. The art is rushed and lacks finesse in an attempt to capture the truth in front of her eyes perfectly.

Her art was pioneering in its take on life as the pieces that had come before her work had been portraying beautifully groomed women with rosy cheeks and seemingly not a care in the world as they walked through life untouched by hard work, poverty and injustice.

On show until April 29th and, as always, free of charge, Working Women is overwhelmingly simple yet effective in it’s own way, the faces of the women from the early 20th Century haunting the walls of the gallery. You find yourself completely captured by their faces and their lives, all by one painting. If that doesn’t speak of an artist that had true and powerful artistic talent, then nothing does.