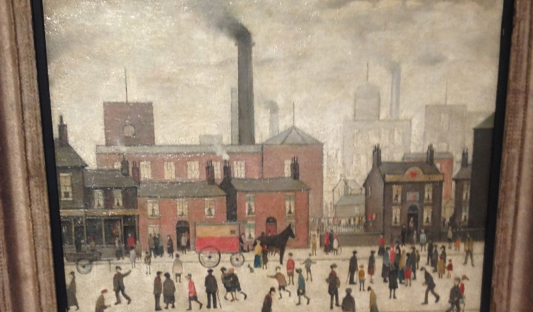 One of the most recognisable names in British art and a symbol of the North that portrays working class life in Manchester and Greater Manchester, until his death in 1976. Leaving behind a cultural legacy that has seen his work revered across the globe and paintings at auction for millions of pounds. In 2000 the Lowry Centre was opened In Salford Quays as a tribute to his life and work, today some of his earlier works were put on display at the Manchester Art Gallery in the city centre.

This particular exhibition was a new concept on Lowry’s work and included paintings from fellow Artist Valette. Who for some time taught Lowry how to paint and hone his skills in Manchester, the contrast of the paintings between the two artists is a great insight into how Lowry’s work developed and changed over the years. Valette’s French impressionist style is something that can be seen In a lot of Lowry’s work but it’s reimagined in his own style. Lowry’s recognisable depiction of working class life in the smoky back streets and industrial landscapes is famous for its artistic interpretations of people and places.

The room in the gallery is small but it’s packed full of pieces and descriptions, which in some of Vallette’s more obscure work can be handy. Featuring some of Lowry’s most famous works, his style is something that is completely unique and unlike so much other English art. In the main building of the Gallery this exhibition sticks out like a sore thumb, moving from huge depictions of renaissance art and late 19th century pieces, stumbling into the Lowry and Valette exhibition feels like stepping into a different world, because well it really is. The contrast is something you really feel and I think it is central to the exhibition. It doesn’t quite fit in at the main building and would probably be better placed in the new modern wing, but it seems like this is intentional.

The pieces are all distinctly Mancunian and show a glimpse into the industrial mecca that the North had become at the time. Lowry’s paintings often depicted working class people in day-to-day life, the paintings are often a myriad of scenes and interpretations of real places and people in his head. To make his work a theme of his own working class identity as well as the people that surrounded him in life. For most of his life he was a rent collector, this enabled him to walk the streets of Manchester rand Salford on an almost daily basis, and this became a key influence in his work. Being able to digest and re-imagine the world he lived in is a central theme in all of his pieces which is also reflected in Vallette’s work, who moved from France to London and from there to Manchester in 1905 and set up his own art school, where Lowry became his pupil.

The works are a fantastic insight into northern life through the eyes of two of the most recognisable artists from that era and are a must see for any keen art fans.