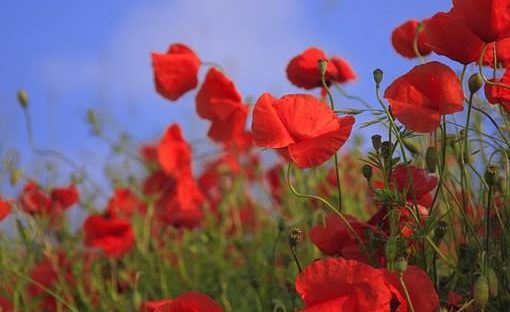 Exhibition Review: Goodbye To All That

The new exhibition, based on a book of memoirs by Robert Grave, commemorates the centenary of the Battle of the Somme. Graves described his book as his ‘bitter leave-taking of England’, writing the book was his form of closure, so he would never have to discuss the traumas of war again.

Back in 1916 on July 1st in Northern France, a battle began where 127,751 British and Commonwealth soldiers were killed and thousands more injured. The battle raged for 141 days. The exhibition depicts life in the trenches and on the front line from the vantage point of someone who experienced it first-hand.

On entrance, the first piece of art we see is ‘The sleepy river Somme’ by Sir Alfred East. This image makes it difficult to believe what happened at this scene many years later. The painting shows swans floating on a peaceful river and the trees reflecting on the still water.

The majority of the art is made up of lithographs, bleak charcoal and mild water colours. The paintings were produced for government propaganda by official war artists. The art was a way of censoring life on the front line for the families of soldiers.

Rather than portraying the war in its real light: freezing, dead bodies and rats, art was produced showing people at home courageous young men bravely running into battle. Surprisingly, there aren’t too many images of soldiers, with the reality of the war too horrifying and unbearable for the families of the young men so the artists instead depicted events before and after the fighting. Shelters that soldiers had formed, the testing of new weapons and barren battlefields with broken trees looming over hills, small patches of red poppies in the distance provoking a sense of hope.

A chalk portrait by Eric Kennington of a solider climbing over the trenches ready to fight conveys military glory and brings to light how young some of the soldiers had been. The most notable piece was by CRW Nevinson, a desolate scene with a long and winding road cutting through the middle and disappearing into the distance evokes feelings of loneliness and a fear on the unknown.

Throughout the middle of the exhibition, there is no sense of panic within any of the images, doctors and nurses are shown at temporary hospitals, calmly tending to the injured. The rest of the exhibition consists of barbed wire fences, men battling their way through overflowing rivers and stark scenes in the aftermath of the war. Images of men running towards enemy fire rather than been shot down as they were in the memoirs of veterans.

The purpose of this exhibition is to bring to life the realities of war, influencing our view on the First World War and asks the question: By remembering, do we learn from our past?