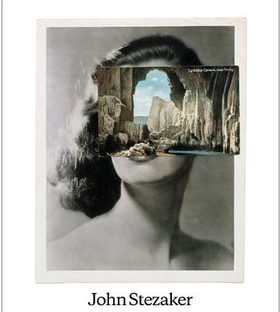 From the first photograph taken by Nicéphore Niépce in the mid-1820s to the endless ones we snap on a daily basis now, there is, of course, an unimaginable amount of photographs floating in the ether, lost in time.

John Stezaker, however, finds some of these images (or rather, as he often suggests, these images find him) and gives them a new lease of life. In a collection of his work at The Whitworth, gifted in part by the artist himself, and in part by Karsten Schubert, collages from a number of Stezaker’s series are on display. And in just 22 pieces, Stezaker had me completely transfixed by his work.

From ‘Untitled (Film Portrait Collages)’ to ‘Mask,’ to ‘Marriage’, Stezaker splices and combines images to breathe new air in to them, give them new meaning and reimagine old meaning. With something as outwardly simple as splicing and placing on top of another image, each series manages to evoke all manner of emotions. In ‘Marriage,’ publicity shots of film stars are overlapped creating obscure hybrids, creating a sense of the uncanny and making once beautiful images bizarre and, sometimes, ugly.

In ‘Mask,’ glamorous movie stills and actors are partially hidden by scenic photos and postcards, creating an unsettling juxtaposition as well as a feverish urge to know what’s underneath. Yet on top of this, there’s a sensation that, somehow, these photographs work harmoniously together – that they’ve found their place, finally, on top of each other in their peculiar pairings. Stezaker’s careful, considered placement of one image on top of another, be it trees on a B-movie actors face, or white square placed in a film scene, the sheer care in which these collages are made make it difficult to question them.

There’s a timelessness to Stezaker’s work, and in omitting faces, or combining two different faces, it’s hard to know where/when these pictures came from. The exhibition highlights ideas of the physical timelessness of these images, too. Though once lost, these photographs in whatever chopped, spliced, rearranged manner, are physically present in The Whitworth. When we’re often told about the permanence of technology, of photographs put on the internet, there’s something fascinating about the re-emergence of these images that existed solely in their physical form.

In a climate where hand craftsmanship seems to be resurging, and splicing seems to be on the rise – Instagram-famed artist Adam Hale (@thedailysplice) amassing huge popularity and working with the likes of Adidas, Mulberry, and Louboutin – Stezaker’s work is a trailblazer. It’s moving, occasionally funny, thoughtful and thought-provoking. An ode to the power of photography, but also to how simple changes can completely alter the way we look at something. Who knew a waterfall stuck on the face of a film star could do so much?

The collection is on display at The Whitworth until June 2018.