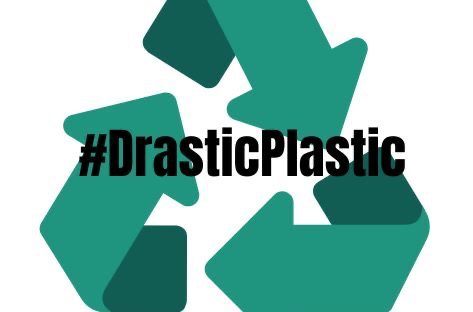 The #DrasticPlastic campaign was created to help eliminate plastic waste within Manchester. Modern society is increasingly dependent on disposable plastic products. Half of all plastic produced is designed to be used only once and then thrown away, which can occur after just 30 seconds.This is a serious and alarming issue currently affecting our environment globally which requires rapid action.

An environment Agency spokesperson said : “Plastic pollution is a threat to our natural environment and by working together, we can reduce the amount which enters our land, rivers and the sea and protect wildlife for future generations.”

Once a year at least 8 million tons of plastic land in the oceans, the equivalent of a dump truck dumped into the seas every minute. Plastics have had and continuously cause great environmental impacts as they are generated in its production, consumption and more precisely in their disposal. These impacts continue to be caused by pollution of undesirable substances emitted into the environment, as well as the distribution of plastic.

Plastics have had and continuously cause great environmental impacts as they are generated in its production, consumption and more precisely in their disposal. These impacts continue to be caused by pollution of undesirable substances emitted into the environment, as well as the distribution of plastic.

Plastics escape into the environment and end up in the organism of many animals, once in the animal organism, the plastic contains chemical which causes hormonal dysfunctions, death by asphyxiation, among others. Just as it affects wildlife it certainly hits human life as well.

Believe it or not, many of these micro-plastics are already in our immune system, this can cause serious damages to our health, after consuming food that may have been contaminated by these micro-substances could cause miscarriages, tumors, ovarian syndrome, infertility and testicular problems for instance.

The use of plastic is highly present in the most diverse places and formats. Thus it becomes a little tricky to say that it would be easy to completely stop the production and consumption of this same material. However, speaking in more palpable terms, it is possible to reduce plastic waste in our environment and reduce its consumption. After all, by the rules of the three R’s, we must first reduce consumption, secondly reuse, and finally recycle.

There are several ways to help contribute to a better planet If each one of us does a little for that matter. It will not be long before we see changes and influence others to do the same as we are setting an example. In addition to that one of the options for reducing the use of plastic would be to have more people carrying food kits like a mug / bowl, cutlery and cloth napkins instead of disposable items. There are retractable options, such as camping cutlery, that make it easy to carry and don’t weigh in our backpacks.

Many of our habits are harmful to our environment and we don’t even realise it. This starts from our homes, such as our daily hygiene routines. Most people are accustomed to brushing their teeth with plastic tooth brushes that we purchase at the supermarkets. Although, fortunately bamboo toothbrushes have recently been introduced, many people have already accessed it. Let’s take this as an example and change our plastic tooth brushes too!

Instead of buying disposable razors, we should stick to metal ones, these products are durable and financially worthwhile as well as doing this we will be decreasing the disposal of plastic products. Let’s make a mind map of our plastic consumption and let’s rethink what we can do to reduce its consumption.

New attitudes create new examples. With each bag dispensed, we will be influencing other people who accompany us when we shop for example or even incentive our relatives at home to do the same. Let’s start to avoid the use of plastic from today together as a community.

Recycle Today, Don’t Throw It Away!