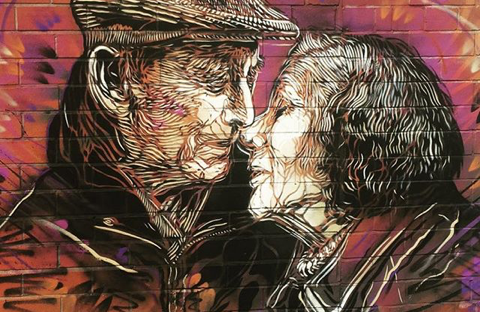 Manchester has many renowned art galleries scattered across the city. From the Whitworth Art Gallery that holds paintings created by the likes of Pablo Picasso, to the Centre for Chinese Contemporary Art that celebrates a thriving Chinese culture, Manchester has never been a better place for an art lover.

However, it is not just about the art galleries these days. In fact, one area in particular has shown that art doesn’t just look beautiful in buildings, but can also look beautiful on buildings.

I’m talking about the Norther Quarter, of course, which has become one of Manchester’s most trendy places to go. It built its reputation on a love for quirky independent businesses, great food, variety of bars and the one thing you can’t avoid, the beautiful street art that can been seen on every street.

The street art effortlessly complements the style that has been generated over time and turned the streets of the Northern Quarter into a fantastic art exhibition free for all to view.

There are many pieces of street art that can be found in the Northern Quarter but like any other art exhibition there are always ones which prove more popular.

‘Look, there’s a giant blue tit’, is a giant mural that can be found on Newton Street. Commissioned by the clothing brand Converse and executed by artist Faunographic, this is definitely an Instergramer’s dream. With the old red brick background of the warehouse, the bright colours of the blue tit and twisting dark green vine that follows the rugged broken curves of the wall, there would have to be something wrong with you not to enjoy this one.

Commenting on the beauty of the blue tit, Lucy Manning, 24, from Manchester said: “I walk past the giant blue tit on my way to work every day and even if it’s raining and grey it still seem to shine.

It’s just a beautiful piece of art and is probably one of my favourites in the Northern Quarter.

Just a stone’s throw away on the Brightwell Walk you can find another very impressive giant mural by Hyuro which was part of The Cities of Hope Festival which bought nine of the world most renowned street artists together to create new landmarks of hope across the walls of the Northern Quarter. Hyuro depicts a chilling and thought-provoking image of a child of war dressed in drab grey clothing, blindfolded with his hands tied up behind his back, and an assault rifle binding it together. His shadow in the background that cascades down over one half of the building almost gives the sense that the boy is under a spotlight.

The image represents an ongoing issue about children are being pulled in to wars through no fault of their own. This image is a truly breathtaking spectacle and shows the power of street art. This piece is very typical of Hyuro, who often does not use colour in her art work which helps amplify the meaning behind it.

Emma Bennett, 21, from Manchester said: “It’s not exactly the happiest piece of art I have ever seen but strangely enough I walk past this every day on my way home from university and can’t help but stand and stair.

It’s just a powerful and engaging piece of street art.

Another Cities of Hope piece by Spanish duo PichiAvo (Pichi and Avo) can be found on Port Street. PichiAvo took on the theme of conflict as part of The Cities of Hope Festival and produced a magnificent mural of two Greek Gods fighting.

The gods fighting in the artwork are Hercules and Nessus. According to Greek mythology, Hercules killed Nessus because he forced himself upon Hercules’s wife, but, in turn, it was Nessus’s tainted blood that killed Hercules.

This is a beautiful piece, not only because of the story behind it that brings it to life but the detailing put in to the two gods pulls you in. The vibrant colours around the outside of the gods almost gives them a 3D effect, projecting them off the wall and instantly engages anyone the walks past. This type of Greek god street art can be seen in a number of PichiAvo’s work and the pair have worked across the world producing murals like this one.

James Casper, 26, a local photographer Manchester commented on the opportunities the various street pieces provides: “I love this bit of street art so much that I took a picture of it on my camera and had it blown up on to a canvas that I have in my house.

"As a photographer, places like the Northern Quarter are a living dream, especially since The Cities of Hope Festival that has produced some incredible art work for all the public to see”.

Moving away from The Cities of Hope art work for now, to Stevenson Square which is full of fantastic pieces, one of which is bound to catch your eye. The David Bowie tribute portrait that was produced by Akse, a Manchester-based street artist that specialises in portrait art and whose work can be recognised right across the Northern Quarter for various different pieces. The portrait of Bowie is based on an iconic image of the singer and is scarily brought to life by Akse with his incredibly detailed and animated piece of art.

Akse has also used this piece of wall, which used to be an old public toilet, to do a number of different celebrity portraits such as, Amy Winehouse and Nelson Mandela and repeatedly uses it as an ever-changing canvas for his work. Much like his position in Stevenson Square, Akse uses another spot of wall near the corner of Tibs street in which he has done portraits of singer Prince and also Breaking Bad star Bryan Cranston.

Speaking on the tribute to the late Pop artist, William King, 19, from Liverpool said: "I’m a Bowie superfan, so when I saw this piece on my friends Instagram I got on the train and headed down to see it.

"I thought it was insanely good and I even ended up going to see all the other street art that I'd been told about in the Northern Quarter."

C215 is another street art group that have a variety of different art work spread across the Northern Quarter. Best known in the Northern Quarter for their two pieces that bring light to the issue of homelessness. The first you can find on Tariff Street. This image of a man’s face smoking a cigarette is so bold it will send shivers down your spine.

His piercing eyes that look full of sadness tell a story all by themselves and the dark colours used by C215 perfectly compliment his expression. The second you can find just a short walk away on Warwick Street.

This image follows the same issue of homelessness and was originally based on a photo by local photographer Lee Jefferies, who is known for his intimate portrait series of homeless people. This is an emotional piece of art portraying an elderly couple embracing. The pair look to be sharing an intimate moment and even looking at the image you feel like you are intruding. With very similar styles it is clear that the artist of both these pieces is C215.

Finally, no area would be famous for its street art, unless it had a piece from the man himself, Banksy. The Northern Quarter has one on the corner of Tibs Street. Unfortunately, the piece is covered over by a perspex box to keep it safe and over the years has become impossible to see though.

Looking at the pictures available of it on the internet it seems to be a very cute piece of a Bull Dog no bigger than a large baking tray, but nonetheless, this still adds to the character of the art-filled streets of the Northern Quarter.