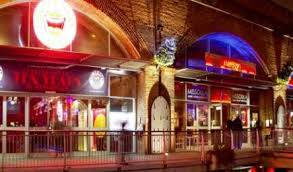 On the third Sunday of every month, the Comedy Store allows comedians to showcase their new material to a live audience.

The evening started with the host Toby Hadoke who got the audience ready for the 8 acts that followed.

Audience participation was the main ‘bit’ of his act, he wanted to get to know the audience luckily there was a rowdy group of girls that were ready and rearing to get involved.

The funniest thing about the first act was thinking his name was Alun Cockrun, when in fact it was Alun Cochrane. He didn’t have jokes, he had ‘ideas’. Maybe he should re-think the concept before he takes his show to Edinburgh, as there were a few awkward silences when he delivered some of his punchlines.

Hayley Ellis was by far the best comedian of the night, though it wouldn’t have taken much to out-do a few of the acts, she surpassed all expectations and had the audience laughing from the onset. She related her jokes back to her past as being a supply teacher when a child said she looked like a pigeon (which she kind of does). What worked especially well is that she actually believed in her jokes and laughed along with them, which made the jokes a lot funnier.

You know when you look at someone and you think, ‘they will be funny’. Well, Matt Hollins looked like he would be funny, but to say he was the least funny person to have graced that stage is an understatement.

He divulged whole story about how he met someone from the spice girls, but it turned out to be ‘Mandy’ from Hull, what was the punchline? What was the whole joke of the story? The entire audience looked confused, I would say don’t give up the day job but…

Deflated from that performance, the audience looked ready to leave however next up was Luke Graves. He used audience participation and his own life as his main form of interaction and stand up. This resonated well with everyone as it was highly relatable and made people feel part of the act.

They definitely did not save the best till last, Peter Brush was last on stage and he just didn’t seem to understand the concept that the night is for trying out new material to see if the audience find them funny. He went on to tell jokes that he admitted to the audience didn’t work out the several times before this gig, but on he went and was met with dead silence as not one member of the audience understood the joke.