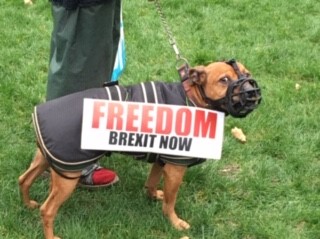 Hundreds of Leave supporters have begun to pack out Parliament Square in London in anticipation of Britain leaving the EU at 11pm tonight.

There is a heavy police presence in the square and around Westminster, alongside the world’s media which  is camped out on the green to mark the final moment when Brexit finally happens.

Leave voters have arrived draped in the Union Jack and St George flags and – so far – there is something of a carnival atmosphere to the gathering.

Bemused EU tourists looked on with some surprise at the massed ranks of Leave voters with placards showing their relief at exiting the EU.

Prime Minister Boris Johnson is due to make a speech outside Downing Street at 11pm.