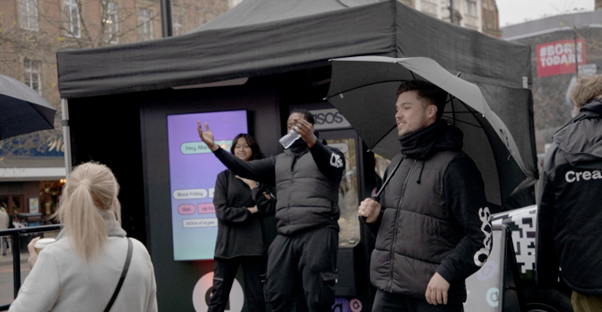 A passer-by who chose to challenge other contestants in an arcade game and defied the rain won £1,000 at an event in Piccadilly Gardens.

Hellen Mabilahislam took turn to play in the game and pulled the top price of the thank you day Asos organised for customers to as emerge winner.

Hellen says the 40 minutes she spent in the rain in the queue before it was her turn to play the game were worth it.

She said: “The outcome is an amazing prize of £1,000. I am still overwhelmed, still trying to comprehend it”.

She said the prize made her year.

“I will buy a lot of cloths and probably give part to charity. I was not expecting this at all,” she said.

The queue of hopeful of winning the prize of £1,000 began to thin out after Mabilahislam won the prize. The envelope containing prize of £1,000 was handed over to her in the presence of other contestants.

Participants at the games in Piccadilly Garden were thrilled with the activities. There was music, free coffee, games and free photographs.

.Everyone who chose to participate in the activities first queued up to partake in the arcade games. After the game, those who had the company’s app on their phone moved to take a cup of coffee before going to take photographs.

A member Asos’ marketing team, Emi, said it was a  joy to meet people face to face.

“We are here today, we have been traveling around cities in the UK to promote some of our products on the streets. So, we’ve been meeting members of the public in real life. Everything we do have just been online. It’s been good to come out to meet people in key cities in the UK and engage with our customers,” she said.

The tour had been to Liverpool, London, Nottingham before coming to Manchester.

Emi said: “We are giving away some prizes. You could play game to win these vouchers. The top prize is £1,000 cash and you can also win some vouchers £100, £50 and £20. On the machine participants can get a free cup of coffee if they have the Asos app”.