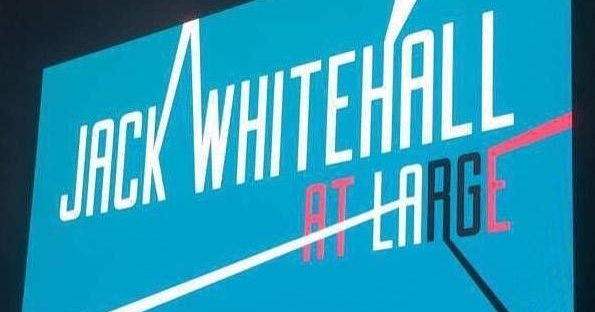 Jack Whitehall: At Large tour saw him perform two nights at the Manchester Arena. The 28 year old posh man-child returns to his university stomping ground to perform to a crowd of around 36,ooo over the two nights.

As I saw him during his Jack Whitehall Gets Around tour in 2014 I knew I would be wetting myself all night. And that I was.

There could be a little bias as I was a massive follower or Fresh Meat and Bad Education, as well as seeing The Bad Education Movie three times and counting. Regardless, I knew it was going to be a night of hysterics.

Before Jack even appeared on stage the crowd was laughing as a video played showing Jack riding a horse to get to the venue after his car had broken down, and you could see everybody was questioning 'he can't actually be coming in here on a horse…can he?'.

You guessed it, he made his first appearance on stage riding on the back of a horse, which had the audience uncontrollably howling with laugher.

Only minutes later, after Jack made his first few gags about his journey to the venue on horseback and welcomed the northern city which he knows best, the horse had a poo.

Yes, a horse, on a stage in the Manchester Arena had a poo. Whether or not it was staged, you cannot deny the fact it was so crudely hilarious.

The set continued tightly packed with gag after gag, where mostly he was the butt of them to produce never ending laughter.

Jack Whitehall oozes privilege as we learn he does his shopping at Waitrose but he tells the audience he is the unsuspecting new voiceover for ASDA. Let's hope no ASDA big wigs were at the shows as he kept his posh-totty attitude whilst undermining ASDA.

Self-mockery thrives as he tells the tale of drama school rivalry between himself and Robert Pattinson. Whitehall is yet to make it big in America, whereas R Patz (as Jack refers to him as) has the Hollywood upper hand as he is THE Twilight heartthrob!

The show comes to an end with a rendition of Frozen's Let It Go.

Earlier in the show he told the tale of how he wanted to be considered as a 'real' actor and was offered a part in Frozen, only to later find out his Trolls line had been cut from the film. Elsa comes on stage singing as Jack wears his Troll costume and shows his anger as he attempts to out stage her.

A theatrical way to end the show, similar to Mufasa scene in The Lion King ending to Jack Whitehall Gets Around in 2014.

The mixture of anecdotal scenarios and social taboos in some of his jokes left people wondering if he was actually saying that. I was gob-smacked at times but in tears laughing. The man-child proves he can tackle not-so-politically-correct subjects hilariously.

With the show arranged in a social chitchat discourse, his very-camp-very-posh charisma turns it from mainstream, to upper mainstream, which I'm sure Jack would be proud of.