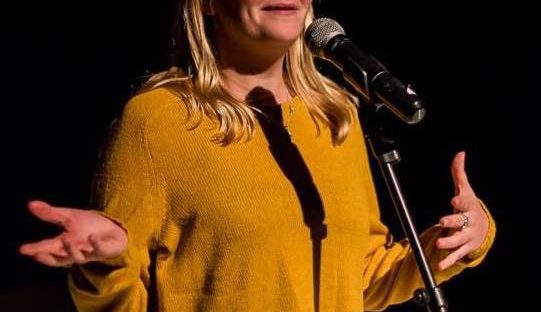 With the assist of her stand-up act, comedian Amy Vreeke is helping to raise awareness for endometriosis in an entertaining way, a condition close to her heart.

The 26-year-old has been previewing her show titled ‘The year my vagina tried to kill me’ in preparation for its debut at next year’s SICK! Festival. When speaking to Endo Aware Amy said her show aims to raise awareness for endometriosis.

From the preview shows Amy mentioned how her act has already started to raise awareness and has received positive feedback.

“Loads of people have said that they hadn’t heard of it before, or even if they had they didn’t realise kind of all the symptoms and the effects it has on people’s lives. That was one of the reasons I wanted to do it, to help.”

Amy was diagnosis with endometriosis back in 2016 after living with undiagnosed symptoms for over 10 years. Amy explained how after reading the actress and fellow endometriosis sufferer, Lena Dunham’s, autobiography she believed endometriosis could have been the cause of her symptoms – Amy was right.

“I instantly finished the chapter and rang the doctors.”

Soon after, Amy underwent various tests and a laparoscopy, her only surgery to date, which led to her diagnosis. Initially Amy felt relief with her diagnosis, in the sense she had discovered what was the cause of her problems.

Amy’s root into comedy began five years ago when she joined the comedy society at her university, MMU Chester.

“I started doing comedy at university – I was doing a theatre degree anyway so I was already kind of in that sort of world, and there was a comedy society at the university I went to, MMU and I joined that because I ‘d always been really interested in comedy. – I was convinced to try stand-up and I did, and I really liked it and I just kept doing it from there.”

Before finding out she had endometriosis Amy was joking about her undiagnosed symptoms in her stand-up.

“I think the weird thing is I’d kind of been making jokes about it without realising it for a while, because I’d written about symptoms and stuff like that – that had been in my set anyway.”

Talking about endometriosis in her stand-up has become a form of coping mechanism for Amy, as she would say.

“It definitely is a coping mechanism in a way, because if you find the funny side of something that’s happening it lightens it.”

Hoping to progress with her comedy, in all aspects of the entertainment genre, Amy continues to run comedy and drama workshops as well as developing her stand-up. Amy also intends to take her act on tour and to medical conferences and schools, to raise awareness for endometriosis.

“I’m hoping that this is just the start – with the show I’d like to tour, and also take it to medical conferences and maybe do educational things for schools as well.”