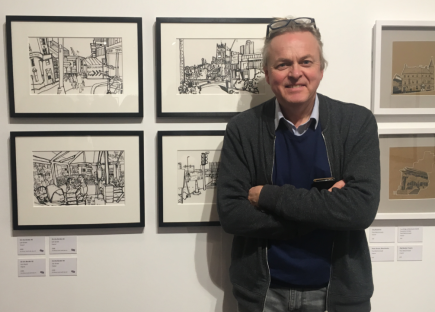 Climate Action in Hulme: From the Ground Up by Len Grant

Last month saw the launch of Climate Action in Hulme: From the Ground Up by Len Grant which was a commissioned piece by Manchester City Council to celebrate what Hulme has achieved and hopes to have a knock-on effect on other local communities.

The Hulme ward councillors were proud of what had been achieved regarding climate action in Hulme and commissioned freelance illustrator Len Grant to create a book to celebrate and inspire other people around the city.

Len spoke to residents of Hulme as well as business owners, community groups and schools to create the 64-page book to highlight the work on climate change in Hulme.

“Hulme’s an interesting place because it has a history of activism, there are some quite vocal people in the community and over the years have been talking about the local issues, so it was good to hear their views,” he said.

“Hulme appreciates and understands there’s lots more they can do but they probably make a bigger start than most people.”

Len said that the book had already began to make a difference as the head of a climate group for Didsbury was “very keen to read and get inspiration from the stories”.

Climate Action in Hulme: From the Ground up is available to read here.