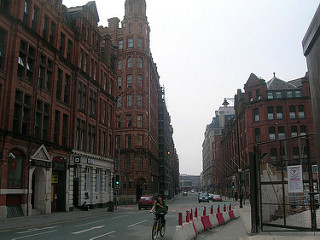 A sinkhole has appeared in the middle of a very busy road causing chaos at the heart of the city.

Police closed the southbound carriage of Whitworth Street, from Princess Street to Oxford Road, causing delays for those travelling in and out of the city.

Whitworth Street is currently still closed this morning with road workers and the council promising the road will be back in use this afternoon.

Sewerage company United Utilities visited the site early on Monday and confirmed none of their sewers were damaged underneath the sinkhole.

The crater obstructed crowds outside the Palace Theatre and Palace Hotel last night.

Manchester Council’s city centre chief said: “The work on the depression at Whitworth Street will be completed today, thanks to all for their patience.”