Chinatown’s residents and businesses are being consulted on plans to restore Chinatown’s vandalised landmark pagoda.

The council wants to redesign the pagoda situated at the cross section of Nicholas Street and Faulkner Street and has reached out to We Love Chinatown group.

The redesign was triggered by an event in 2018 where the pagoda was vandalised by a man in his 20s, who stole four ornamental carvings. Three of these were later recovered.

Councillor Joan Davies, representing Piccadilly ward, said: “At the moment we’re still on the analysis and draft proposals stage of consultation on the best way forward for the Chinatown pagoda and car park redesign.

“Chinatown is a great attraction and brings so many tourists each year that we want to make sure we honour the space properly, as a destination and as a place to live, work and do business.”

Chairman for the Chinatown Business Association, Raymond Chan, has been in the position for 16 years.

He said: “The archway will remain the same but the pagoda needs to be fixed and that is down to the council not us.

“The council had no intention of doing anything about it until the vandalism. Even in terms of security. Chinatown struggled before covid due to rough sleepers and homeless people and this has been a growing concern.”

Lily Zhou, owner of Lily Salon in Whitworth Street, said: “Manchester city council gave us leaflets about health and safety in the area following the incident.

“We do have a problem with the homeless coming into the beauty salon and massage parlours which is scary because we ask him to leave but we’re not feeling safe. Cameras installed or security would give us peace of mind”.

Mr Chan added: “Although the Chinatown Federation gets a lot of money, I’m not sure where it goes as it isn’t going into improving things for the local community. We don’t get a say in what happens.

“It could be down to the language barrier that we can’t contribute to what happens with the redesign in our own community. We would like to advertise Chinatown to bring in more tourism.”

Twitter users suggested removing the car park to make way for a brighter public square. However another user pointed out that Chinese regulars need the parking when doing their weekend shopping.

The council are due to set a meeting to discuss the outcome of the survey. No date has been set yet.

22nd January marks the beginning of Chinese New Year and heralds the Year of the Rabbit. 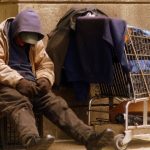