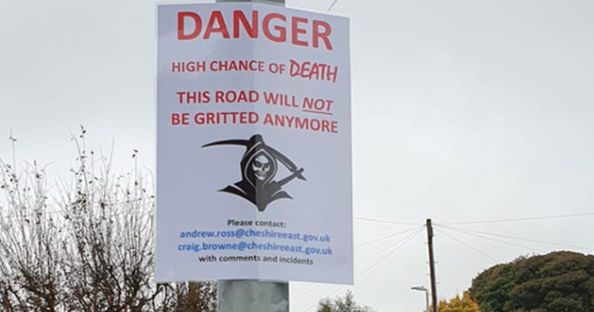 Cheshire East residents have raised concerns over 219 roads that will no longer be gritted this winter.

Gritting has been scrapped from numerous areas of the county including, but not limited to Wilmslow, Crewe and Congleton.

Cheshire East Council outlined the plans in June this year.

In a statement, it said:  “The ‘Well-Managed Highway Infrastructure’ (WMHI) code of practice, which is overseen by the UK Roads Liaison Group on behalf of the Department for Transport (DfT), recommended local highway authorities review gritting routes to prioritise the most critical parts of the road network.”

The roads affected by gritting cuts have been assessed by a scoring system. This considers risk areas including steep incline roads, ice prone areas and roads with a high daily usage.

Cheshire East resident Alek Adamski, from Macclesfield, said he became aware of the cuts after being “shocked” to see his road mentioned in reports.

After the meeting Alek told NQ: “This roads been gritted, as far as I’m aware, for the last 50 years until this winter coming.

“I’ve been in quite a long and ponderous correspondence with the highways department at Cheshire East, who, to put it politely, have fobbed me off. They said it was reviewed in March and my road didn’t pass the scoring.”

After gaining more detail on the scoring system and researching maps of affected routes, he said his road and others should be gritted.

He said: “The reason I did the maths is because the maps didn’t add up and I think I’ve proven that.”

With 127km of roads across Cheshire East effected, Mr Admaski wanted to raise awareness through Facebook, so set up the East Cheshire Gritting Action Group, which has gained nearly 450 followers in three weeks.

He said: “I’m pro-gritting, I think this is a serious safety thing. My road is steep and dangerous but at least it’s a 30mph limit, some of the roads cut have a 60mph limits so that is a different ball game of safety.”

For those roads which did pass the scoring system, treatment began this month.

Councillor Craig Browne, chair of the council’s highways and transport committee, said the review was needed to ensure around £2m of funding was secure.

Responding to Mr Adamski, Cllr Browne said “While I understand some residents are upset roads have been removed, I would ask them to consider what services they would cut.”

He told NQ after the meeting: “This review was essential to ensure the council does not lose future incentive funding from the DfT, thereby placing an even bigger strain on the borough’s crumbling road network.

“The code of practice requires that we focus our efforts on gritting roads where there is higher risk and we will continue to provide an effective and responsive service – as the safety of our road users is paramount.”

Mr Adamski had a message for other campaingers: “Write to your local councillor. You may get the pat answer back but that’s not good enough so keep fighting.”

Cllr Browne said “a review of the programme will be carried out annually”.