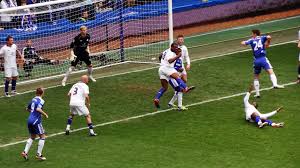 Chelsea cruised to a 3-0 victory, as the reigning champions Leicester fall to 13th in the table.

Chelsea comfortably saw off Leicester as Costa, Hazard and Moses were all on target for the blues.

It was N’Golo Kante’s first game against his former club, being booed by Leicester fans as he took his first touches in the game.

Antonio Conte was a man under pressure as several bookmakers had him as favourite to be the first manager to be sacked this season.

Leicester bore black following the death of the Thai king and posed for a team photo alongside manager Claudio Ranieri as a show of unity.

The game kick-started with Chelsea holding majority of the possession in the first couple of minutes, taking the lead in the 7th minute as Hazard’s corner was flicked on by Matic. Poor marking by Leicester in the box meant that Costa was open and left free to slot home. Costa is now on seven goals for the season, making him the League's top scorer.

Leicester, who conceded three goals from corners against Manchester United last game week were punished via set pieces once again.

Chelsea continued to press following their 7th-minute goal, nearly bagging another as Alonso crossed in a good ball but it was cleared away for a Chelsea corner by Albrighton. Chelsea were looking more confident throughout the game, with both full backs playing higher up the pitch.

David Luiz looked more relaxed at the back, following an abysmal performance against both Liverpool and Arsenal. Luiz nearly got  his first goal for Chelsea since his return, sweetly hitting a trademark free kick onto the post after Hazard was fouled by ex-Chelsea man Robert Huth, picking up a yellow card.

Chelsea’s second goal came in the 32nd minute as Huth and Hernandez both failed to intercept Matic’s pass to Pedro, who helped it onto Hazard, taking it to the side and slotted it into the net.

Hazard, whose goal against Tottenham last season meant Leicester won the league, punished the champions after their poor defending and the game looked like it had been put to bed as there was no fightback from the Leicester side.

It was a perfect first half for Chelsea, who were dominant over the current champions.  Leicester only managed to get two shots away the whole half, with none of them hitting their target, while Chelsea impressed with nine.

Leicester started the second half with a bit more fight, having a penalty claim waved away by referee Andre Marriner, with Schlupp making the claim that he was brought down by Moses.

Kante’s great game continued as he surged forward on a counter attack following a Leicester corner, sending Moses a sweet pass, which Schmeichel did well to save.

Ahmed Musa, who started for Leicester, did no more than his striking partner Jamie Vardy as Chelsea defence proved solid.

Luiz’s dream day nearly turned into a nightmare after he turned Albrighton’s cross on to his own goal, with the post saving his blushes.

A bizarre moment came midway through 2nd half as Costa was shouting at his bench to be substituted, knowing that if he picked up a yellow, he would miss the big clash against Manchester United.

Kante nearly capped of his man of the match performance with a goal, only for his shot to be blocked. Chelsea rounded off their perfect win with 10 minutes to go as Moses converted a 14-pass-move in style, assist provided by substitute Chalobah.