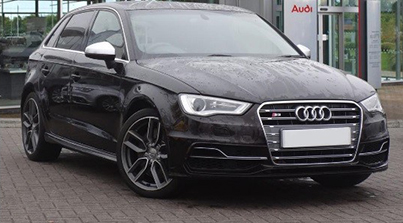 A car being sought by police is believed to have been used as a getaway vehicle in the shooting of Christian and Jayne Hickey.

The black Audi S3 was seen on Dover street in Eccles at 8.35pm and left shortly before returning at 9.20, prior to the shooting.

The suspected offenders then speedily made off on Worsely Road, almost running over a motorcyclist.

Detective Chief insp. Paul Parker said: “If this was you, or you remember seeing a black Audi S3 parked up on Dover Street or travelling at speed on Worsley Road, please get in touch.

“We are also trying to trace the occupants of a small dark coloured hatchback saloon that had a broad stripe running diagonally from the front door over the wheel arches.

Christian Hickey, 8, and his mum Jayne, 30, were both shot on the doorstep of their home in Salford after answering the door to two men.

After numerous surgeries both have now left hospital and are recovering.

The first offender is described as white, between 19 and 20-years-old, of ‘chunky’ build and wearing a baseball cap. He spoke slowly and with a Salford accent.

The second man is described as white and was also wearing a baseball cap.