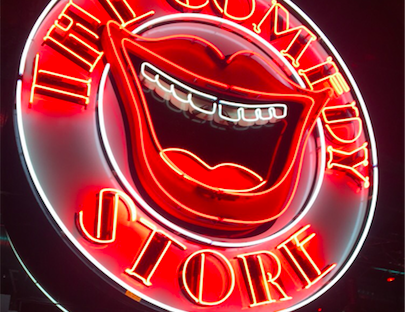 The Best in Stand-up @ The Comedy Store

The Comedy Store, Manchester. The iconic venue, located under the famous old arches in Deansgate Locks, greets you with its glowing circular stamp hallmarking its situ amongst the many popular drinking establishments.

I went to see one of the ‘Best in Stand Up’ shows with a programme roster of MC Andrew Ryan, Peter Johansson, Francis Foster and Larry Dean.

On entering the quirky and unique venue, the long retro-styled bar enticed me to grab a pre-comedy drink before joining 500 other comedy-goers on the red-velvet seats of the auditorium. Although not completely packed, you could feel a definitive sense of apprehension and an underlying buzz in the room.

The room lights dimmed and orchestrated towards the stage. MC Andrew Ryan appeared from behind the curtain to start the show. His cheeky Irish charm won over the crowd instantly and he later materialised as the definite crowd favourite of the night with his hilarious transition appearances. His comedy was mainly focused on audience interaction and with his witty and sharp exchanges, he had the audience hanging on his every word.

Straight on after was Canadian Peter Johansson with a set consisting of humorous relationship remarks about his 10-year marriage. He went on to discuss the issues of getting older which the audience related to and found amusing. His dark, crude sense of humour throughout all of his content was shocking yet comical. The line: ‘This is how much I hate seeing a picture of your child… I don’t want to see them even if they are missing’, revealed his inner comedy darkness.

After a short break to refill drinks, half-Venezuelan, half-English Francis Foster entered for, we later learned, a trial run under the iconic spotlight. With a strong South London accent he explained with sadness that he turned out more English than Latino, happily making fun of his own pale skin and geeky glasses. The laughter was a little slow to begin with but as he settled into his set the laughs continued throughout. The end of his set took a sexual turn, revolving around his love life downfalls which, although predictable, the audience unarguably found hilarious. Maybe one for another shot at the comedy fray.

Glaswegian Larry Dean stole the final slot of the night, accelerating the night once more with rowdy amounts of laughter. His content revolved around his experience as a gay man visiting Dubai where homosexuality is illegal. He had a very confident presence which made the audience feel at ease. Although largely sexually orientated, he delivered his content in an original quirky way which made it seem more fresh than the previous two acts. A pleasant end to the night.

The star of the show, however, had to be MC Andrew Ryan dishing out belly-laugh hysterics throughout his mini-slots. With a sense of professionalism, Ryan was the only act to avoid the easy sexual gags which perhaps set him apart from the otherwise entertaining amateurs.

All in all, it would be difficult to disagree that The Comedy Store in Manchester is one of the best alternative night outs the city has to offer. Free from any awkward laughter, it provides dynamic amounts of comedy in an intimate, authentic setting which is refreshingly hard to criticise. With unbelievably reasonable ticket prices, I, like many others, will certainly be returning.