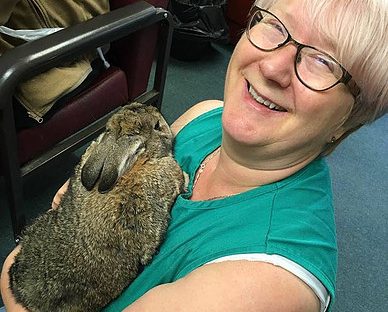 Mental health patients at crisis point are being treated for therapy with visits from dogs, cats, rabbits and even a mouse.

Noah’s ART (Animal Rescue Therapy) sees founder and mental health nurse Sharon Hall take in animals for sessions where patients handle and learn how to take care of them.

Noah’s ART provides two projects to hospitals in Manchester. The first project is aimed at men with long-term conditions such as bi-polar or schizophrenia. Many of the men spend long periods in hospital and the project allows them to reconnect with living things and open up about their feelings.

The second project targets women facing depression, bereavement or psychosis. The animals are taken to the ward at a time where the patients find it difficult to concentrate.

Sharon was prompted to set up the organisation when she found that her puppy Moose helped her to cope with the loss of her parents. Moose, a King Charles Cavalier Spaniel is now one of the most popular among patients.

Sharon takes in animals from various places including rescue centres or unwanted pets.

She said: “We once had a great escape where Big Joey went around and visited some of the female rabbits so we had over 20 babies”.

Sharon believes that the therapy helps reintegrate patients who have been in hospital for a long time back into society.

“In different groups you see different responses. In mental health, the changes are sometimes subtle, slowly you’ll see better engagement. Working with learning disabilities, over a six week programme we’ll see their confidence grow, giving commands to the dog, being assertive, using their voice and giving instructions,” she said.

“We know from anecdotal stories where occupational therapist will say that a patient has never got involved in sessions but they’ve go out of bed because the dogs were here. On an emotional level it helps some people connect back into being part of the world.”

The Dukinfield based organisation is one of 35 schemes funded by £330,000 grants from the council that aim to improve the wellbeing of people living in Manchester.