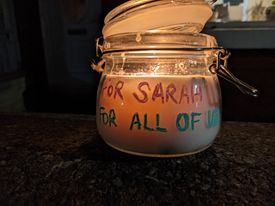 Sarah Everard, 33, from London disappeared on the way home from a friend last week. Her remains were found in woodlands around Kent. A Met Police officer has been charged with her murder.

The case sparked a debate about gender violence, with women speaking up on social media about their fears and traumatic experiences of walking outside at night.

Men joined the conversation by asking for advice on how to make women feel safer.

The mayor of Manchester spoke alongside Melissa Johns, Gina Martin and other supporters of the women’s safety movement Reclaim These Streets at a virtual event hosted by Aurelia magazine.

He read out the experience of a woman who got her breast grabbed underneath her shirt by a group of drunk men when she tried to stop them from assaulting a homeless man.

Andy Burnham said: “The conversation must start with recognising that the people who must change are men.”

He added that he saw it as his responsibility to start that conversation.

Activist and author Gina Martin, best known for her successful campaign to make upskirting illegal in the UK, spoke at the event as well.

About the online debate she said: “The way we are having this conversation needs to change.

“Instead of offering [men] individual solutions like ‘I’ll cross the road to make you feel safer’ we need a in-depth conversation about masculinity.”

After a minute’s silence for Sarah Everard, speakers addressed the broad spectrum of female experiences of verbal and physical violence.

Coronation Street actor Melissa Johns, who was born without a right forearm and hand, said about women with disabilities: “We are told our bodies are disgusting and we don’t deserve romantic relationships.

“As disabled women our bodies still aren’t our own.”

Other contributors emphasized the lived realities of trans women, women of colour, and women with hijabs.

Several speakers mentioned the factor of blame. One woman described how she was walking home with a friend when they passed a group of drunk men. One of them moved behind her and put his hands up her skirt.

When her friend berated him for it, she said this just fuelled the men’s laughter. The woman asked the perpetrator why he had done that; and he said: “You were asking for it dressed like that.”

Sarah Miguel, who works at the People’s History Museum in Manchester, said: “We have been conditioned into taking decisions around safety which shape our entire lives.

“The onus has wrongly been put on women to keep ourselves safe, to change our behaviour.

“I don’t want to detract from the tragic loss of Sarah’s life. I can’t however ignore that the media would not portray Sarah’s case in the same way had she been a black woman or POC, a trans woman or a sex worker.”

Chris, the second male speaker at the event, said he took issue with the victims often being at the centre of stories about abuse.

He said: “If the story becomes all about the victim, the perpetrator is no longer part of the narrative […].

“If we don’t start framing men at the center of this, it never changes.”
Chris called for more ‘uncomfortable conversations’ between fathers and sons and among men in general.

Originally, the vigil was planned as a live event on St Peter’s Square in Manchester.

Metropolitan Police originally agreed, but withdrew its support later stating it would be a violation of restrictions surrounding Covid-19.

The High Court ruled that this decision was justified and not against human rights law.

While a vigil in Clapham Common resulted in arrests and violent clashes between London’s Metropolitan Police force and mourners, the situation in Manchester remained peaceful.

People followed the organisers’ advice to stay at home and light candles on their doorsteps.

The event in Manchester was organised by Right To Walk MCR in support of the Reclaim These Streets movement.