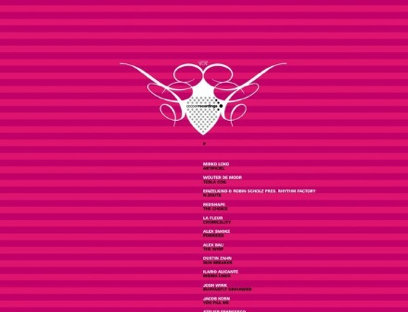 Straight off the bat from one of its most successful years in Ibiza and across the globe since its inception from Frankfurt 1997, Cocoon, the brainchild of German Techno legend Sven Vath have regularly released compilation records collecting some exclusive tracks from their favourite talent that Cocoon is famous for nurturing. ‘P’ follows on its yearly alphabetical form making it one of dance music’s longest series and ‘P’ is certainly up there with some of the best.

It’s instantly recognisable at first listen, there’s a distinctive sound with Cocoon releases that other labels can’t seem to replicate, no matter which artist is producing it. It is absolutely pivotal to the European techno sound. Rolling kick drums and snares paired with electronic melody that both match the darker and lighter sides to techno. The record opens with Mirko Loko’s ‘Artificial’ one of the more minimal tracks on the album we have become accustomed to on previous releases, but it feels like this track is a pre curser to what follows and as you move through the album.

It’s not long before the big tracks make themselves known, on ‘P’ there’s no filler and no interval, it’s perfectly designed to keep up the pace. The first 4 tracks are testament to Cocoon’s reputation for nurturing and developing younger talent in the electronic music scene, many have passed through its doors and onto great things.              Alex Smoke, Alex Bauer and LA Fluer are the distinctive standouts in those opening tracks.

But it’s the midway point of the record where it really becomes one of Cocoon’s premier compilation. Redshape’s ‘The Choice’ shows why the mysterious masked German DJ & live act has had such a phenomenal year, following up from releasing  ‘Tel Aviv’ on running back late this summer, a track championed by Sven Vath every Monday at Amnesia over the summer months. ‘The Choice’ feels like a rhythmic successor to the previous releases we’ve seen from Redshape, fitting in perfectly with the Cocoon mantra, those of you who have seen the aftermovie from Cocoon Mondays at Amensia this summer will recognise this track!

Before long, we get a new track from Cocoon powerhouse Illario Alicante, who for the past few years has grown his own name as part of the Cocoon family. He’s featured on compilations in the past and has produced some impressive records, and ‘Rising Lines’ is no different. With follow up ‘Virgo Storm’ releasing on Cocoon this month and an EP deal with Drumcode in the works, it’s set to be another important year for the German – Italian.

We even get a new track from one of the stalwarts of dance music, Josh Wink’s ‘Buoyantly Grounded’ feels like a re invention for an artist who is often remembered by casual listeners for ‘that acid house track’ (higher state of consciousness) and fits perfectly as one of the penultimate tracks of the compilation.

It’s a record that continues to push the distinctive sound that has made Cocoon the brand it is today, and reflects the huge steps Sven Vath has taken over the years. ‘P’ follows the philosophy that gives new talent a platform alongside some established names. Alongside the annual ‘Sven Vath the sound of the … Season’ from the island, this compilation holds its own in every sense.