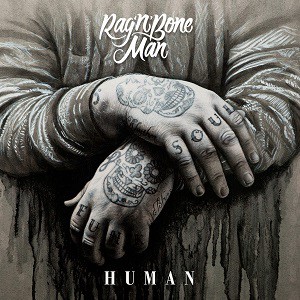 The bearded and husky 32-year-old started out as a rapper and by taking influences from both his blues and hip-hop background, Rag ‘n’ Bone Man attempts to fuse the genres with this album.

The albums biggest strength is with the vocals, there isn’t a bad performance on the 12 tracks. Rag ‘n’ Bone Man really shows his talents. With the lead single of the same name dropping late last year, he already gave us a taste of what he is capable of and this album just solidifies it.

A stand out would be the albums closing track, Die Easy. The a capella feels stripped back and raw and wouldn’t sound out of place in a deep Mississippi blues collection.

It’s a shame that the instrumentation feels bland, lacklustre and generic for the most part. With only a few stand out tracks, as an album, Human feels flat. That’s not to say the album isn’t worth a listen because when the album is at its strongest, it delivers, an excellent example of this would be the track ‘ego’ which fuses both Blues and Rap, though this is the only track that takes the risk, it was fresh and stood out.

Ego and Die Easy are definitely two of the best songs on the album; it shows the moments of brilliance, I just wish the entire album showed the same promise. That is not to say the album is bad, all songs are well made, however, it’s disappointing that the highlights are so few and far between.

After the first three tracks, the album starts to pick up and finds its own identity, this is present on Bitter End; this track has one of the best performances of the album with Rag ‘n’ Bone Man showing off his vocal range, it’s more subtle in its instrumentation than the tracks that came before it and the soulful vocals are only complimented because of it.

However, what seems like a turning point is just a single glimmer as the album falls back into its own flaws. The overproduced music really isn’t needed, if everything was stripped back and toned down, the album as a whole would benefit greatly.

Human is a good album, the vocals are stellar throughout, however, with better instrumentation, the album could have been so much more, the ideas here are exciting but the execution is off the mark. I have no worries for future music as what’s on offer here is good. The world is always in need of a good singer, and I think we have one in Rag ‘n’ Bone Man.