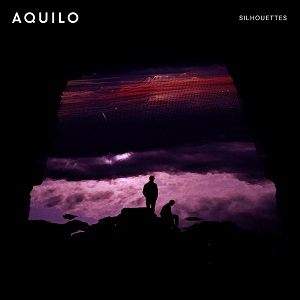 It can be hard to get excited about music that is expressively mellow, however for ambient electro-pop duo Aquilo, their new album Silhouettes gives us a masterclass in intimate and personal lyrics, sharing their experiences of heartbreak, tribulation and regret. This might not be one to listen to if you are feeling downtrodden on the run up to Valentine’s Day though I may add.

Hailing from the Northern picturesque village of Silverdale, the dreamy, melodic sound they produce today is a world away from the heavy rock music they made in their younger days when they played in rival local bands. The Lake District has become established at producing successful artists; electronic duo Bondax have enjoyed international success as have indie rock band Wild Beasts but the boys from Aquilo satisfy a different world altogether.

They began writing as together in 2013 and have since released 5 EP’s celebrating positive feedback from critics and continuing to build a loyal following globally. Several of their tracks have also featured on films and popular series including ‘Pretty Little Liars’. The boys have just returned from North America where they have been supporting singer-songwriter Låpsley just in time for the release of their debut album.

There was a slight concern that the melancholy sound could become repetitive and the break between tracks could get lost however this was never the case; it’s easy to leave the album on repeat for hours without ever feeling disinterested. and each track gives something unique to the final product.

The title track Silhouettes begins with a stunning piano melody which gives into a crescendo of strings as it progresses whilst lyrics such as “we’ve become echoes but echoes they fade away” touch a deep emotion and set the bar high.

Blindside is a reminder of the delicate, endearing sound that we are used to hearing while the production of Human is slick, combining careful instrumentation with moving harmonic echoes.

Fresh and more up-tempo tracks Never Hurt Again and You Won’t Know Where You Stand have a more commercial edge to them and signal hope even in their still broken lyrics.

It’s impressive that they manage to switch up their sound throughout the 14 tracks, holding the listener’s attention. Jazz undertones and an impressive soulful vocal performance in Always Done What You Say would have Jamie Cullum reeling.

At times during Low Light it is easy to get distracted by vocal interludes and loops which seem slightly excessive and take away from their bold and strong lyrics. However, the boys themselves have confessed that they aren’t perfectionists and it’s nice to hear the raw vocals and stripped back piano in Waiting.

This album is a must listen, even though you may find yourself sprawled out across your sofa for hours, motionless as their warm, tranquil sound transports you somewhere else.

Although they have not yet announced when, they will inevitably be embarking on a tour for this masterpiece that will bring them to Manchester (they are no strangers to the Northern Quarter) and if you get chance to watch their live show, take it with both hands! The future looks very bright indeed.