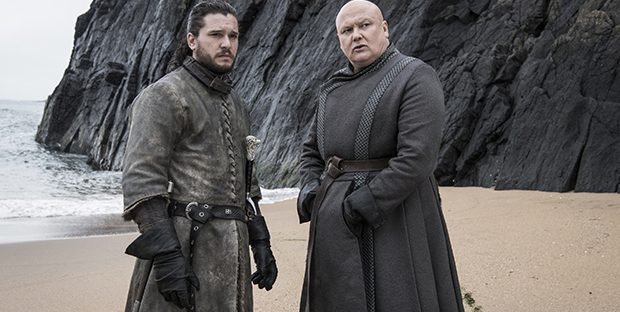 Well if you were upset episode three didn’t have a high enough body count, then fear not – this episode more than makes up for it.

This episode contains probably the biggest turn in the entire show, but a lot of reviewers didn’t think it was earned.

I do, however, and I will state my case but be warned, if somehow you have missed it so far, I’m about to spoil this entire episode so read no further if you’re yet to see it.

After grappling with her identity throughout the show’s run, Daenerys finally snapped and became the mad queen. Critics of this episode say that she turned with no real reason, but like I said, I disagree.

Think of all that Daenerys has lost, all that she’s been through up until now, and the number of ways in which she’s failed.

She’s had no remorse for killing people in horrid ways – she smiled while her brother had molten gold poured on his head in season one, she had the masters crucified and she had Randyll and Dickon burned alive for refusing to recognise her as Queen. Though you can say none of these people were innocent, they maybe didn’t need executing and certainly not in as cruel a fashion – the cruelty she showed in this episode has always been there.

She’s lost a lot of people too, so she has a thirst for revenge. It may feel differently for us because the seasons have been spaced out across years but she’s lost a lot of her closest allies in a few months. Barriston Selmy would have died not long previously, to be followed by two of her dragons, Jorah and Missandei as well as being betrayed by Varys, feeling betrayed by Jon upon learning his true identity and having lost a lot of soldiers over this time as well.

She’s also spent her entire life in exile. The city of King’s Landing has stood, ruled by her family’s usurpers while she has been away. She has been told the people of Westeros will love her, but she’s arrived and found little trust among the people, and feels as though she must inspire fear and respect instead.

Olenna Tyrrell forshadowed this moment in the previous season, when she said Cersei was capable of doing things she couldn’t even imagine. Daenerys did things even Cersei couldn’t imagine, the latter assuming the former’s mercy and virtue would stop her from killing innocent people to get to her, creating a stalemate. In the moment the city surrendered and the bells rang, Daenerys knew to have complete rule she would need to destroy her enemy entirely.

The second half of episode five was shocking. The chaos and horror perfectly executed. It was a great moment as we’ve rooted for these ‘invaders’ from the outset, but now we saw things from the point of view of the people of King’s Landing and the horrors inflicted upon them would make them see our heroes as the villains.

We also were given a rare moment to sympathise with Cersei. She was horrible, spiteful and had an irritating sense of entitlement, but had an understandably human sense of want. She wanted to protect her children and give them the world, even if they didn’t want it.

When she blew up the Sept, innocent people died, but the attack largely killed either her direct enemies (Margaery, the High Sparrow) or pompous individuals concerned with self-betterment (Mace, Kevan). She accepted innocent people dying as collateral, but didn’t deliberately kill them out of spite. It’s hardly better, but you can understand her desire in a way you can’t understand Daenerys’s reckless hate.

As mentionted at the start, a lot of characters had their farewells in this episode, some we’ve seen from the very beginning. Varys was the first to go, executed for treason. His character was great, if a little underused and I will certainly miss the actor who did a great job.

The Hound and The Mountain also said their goodbyes after having a fight longed for by the fans since their brief clash in the first season. The Hound’s farewell to Arya was well earned, his arc completed by saving someone from living for vengeance like he did.

We also, presumably, saw the end of Cersei and Jaime. If that is indeed how they went out, and how would they survive a building falling on top of them, there was no valonqar prophecy fulfillment. I was less of a fan of the end of their arcs. It made sense that Jaime would revert to loving Cersei, despite knowing what she is and they would die together, but for them to die in a failed bid to escape felt a little cheap.

There are many endings I would have preferred, such as Jaime killing Cersei to stop her retaliating, or Jaime performing a mercy killing on her, or perhaps for them to accept their fate and go out, finally, with honour.

The other part of this episode I did not like was Euron. His character in the show has not been well received because he has been quite one-dimensional. His showdown with Jaime did not feel earned, and instead was an annoying obstacle to the continuation of the plot.

All in all, this episode was quite incredible however. I was expecting a bloody battle with a high body count, but I did not expect such a gruesome massacre. There is just one episode left and there might be a twist or two left, so with the Iron Throne presumably destroyed in this episode, here are my final predictions!