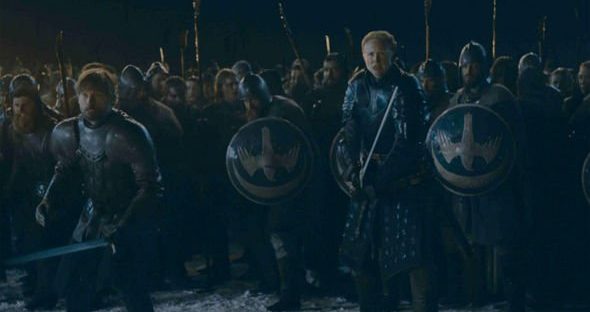 Game of Thrones’ longest ever episode hit our screens this week, with ‘The Long Night’.

The entire episode focussed on a battle between the living and the dead, the latter lead by the Night King.

If two previous warnings were not enough, here is a third that I am about to disclose some MAJOR SPOILERS so if you are yet to watch the episode, do so now before your return!

The first act was the best part of the episode as the tension built to breaking point.

Our heroes know the army of the dead are approaching but due to the darkness and a blizzard, they cannot be seen. The eerie silences were long past comfortable, which was absolutely perfect.

The early scene where the Dothraki charge with flaming swords, all of which are extinguished in the distance was chilling and a great way to show the might and scale of the army they were facing.

That’s not to say the battle itself was bad, but it didn’t have the same dramatic heft of those opening scenes.

Into more in the way of spoilers now and we lost a few characters, although none were too surprising or even too major.

Little Lyanna Mormont’s death was perhaps the most shocking, as she was only a child, but her ending, going down while taking on a giant, was perfect for her character and I wouldn’t have had it any other way.

The most surprising death, however, will have to go to the Night King, slain by Arya using her assassin skills. I have a feeling that ‘Arya kills the Night King’ will become the new ‘Snape kills Dumbledore’ as an irritating spoiler.

But perhaps that’s all the show needs. Most of the characters who die, do so because they’ve made a mistake, whether through trusting the wrong person, letting their guard down or being complacent. A lot of the male characters underestimate the female ones, see them as less of a threat.

The Night King had dealt with Jon, had kept the dragons busy and had overwhelmed the other warriors with a new wave of dead soldiers but didn’t consider Arya using stealth and agility rather than brute strength to get to him.

So, will we ever find out what the Night King wanted and who the White Walkers were?

If the show leaves them as simply being the embodiment of evil, I must say I will be disappointed, but it is possible that George R R Martin’s reasoning is that humans are corruptible and therefore capable of far greater evil, which would mean the real battle is against Cersei.

In that case, the Night King may have just wanted revenge for having been turned into a White Walker thousands of years before and wanted to destroy eveything, although that is weak reasoning, below the usual par of the show.

It is also possible that to defeat Cersei, our heroes must create new White Walkers, or that there must always be a Night King to balance summer with winter, in which case the fantasy elements are not over.

Either way, 80 minutes worth of fantasy battle were certainly worth the runtime (the longest cinematic battle previously was Helm’s Deep in Lord of the Rings at 40 minutes) and I look forward to the final three episodes to see how all this wraps up.

It is also worth pointing out that from Jon’s perspective in that episode, he screamed at a dragon and it died.