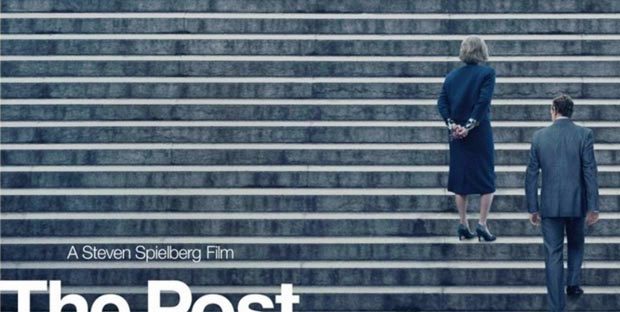 As a film that took only 8 months from the word ‘go’ to the shooting of the final scene, Spielberg’s ‘The Post’ could have easily been underwhelming. However, with a legendary duo like Meryl Streep and Tom Hanks, it is hard to believe that the production would have been anything less than incredible.

Set in the early 1970’s ‘The Post’ provides two stories of evolution running alongside each other throughout. Not only are we shown the moment that ‘The Washington Post’ transformed from a local newspaper into a national respected organisation but we are also taken on Mrs. Graham’s (Meryl Streep) journey to becoming the first female publisher of a big news publication.

As a first-time screen-writer Liz Hannah should be undoubtedly applauded on executing both storylines side-by-side in such a clean and straight-forward way, depicted to us by the continuous jump cuts between Hanks in the newsroom of ‘The Washington Post’ and Streep trying to balance her newfound title as publisher with her high-class social life.

The focal point of the production is without a doubt the highlighting of the Presidential scandal which was the ‘Pentagon Papers’ – four consecutive Presidents knew that the war in Vietnam was failing, however continued to send troops over to fight and subsequently lie to the United States about their position.

The story was first released by The Times and here sees the moment where Streep’s Protagonist character must decide whether they will also investigate and publish ‘The Pentagon Papers’ to become a national respected new source or stay as a local but untarnished newspaper if the release were to backfire.

Streep’s character is undermined and overlooked by the men that surround her on the board and in the news room, having obtained the title of publisher through her husband’s death. She is under-qualified and does not possess much experience for the job.

Spielberg captures the struggle for the character of Mrs Graham fantastically, through shots of her sat in a meeting surrounded only by men, not speaking for herself and having her ideas delivered to the board by a fellow man. It in undeniable that no one believes she possess the strength for the job, except Tom Hank’s character Ben Bradlee.

Although ‘The Post’ is full of female empowerment, Streep’s character needs Mr. Bradlee as a point of reassurance – the two often dine together and he is often seen visiting her home when trying to make decisions for the paper. Hanks respects his role and executes with class rather than succumb to the sexist male characters that surround him.

Spielberg confirmed the production of ‘The Post’ following Trump’s inauguration and the film does not go without its fair share of jabs towards Trump and Nixon. Using actual footage from Nixon’s tapes to tell the presidential perspective as the story unfolds, with the last scene showing Nixon raving about how he will never let Washington Post reporters into the White House again – a note of comedy to end a movie built on history.

‘The Post’ depicts the strong message of the importance of the free press and speaking truth to power which Spielberg and Hannah have cleverly decided to reiterate in a time when everyone needs a little reminder.