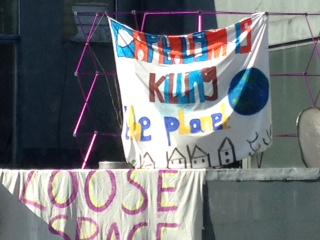 VIDEO: Squatters who took over Cornerhouse cinema due to be evicted

Cornerhouse Cinema shut down and relocated as HOME two years ago, back in 2015, and has since been unoccupied and unused. Loose Space, a collective of squatters, took over the building to use as an autonomous space last Monday and has turned the abandoned building back into a hub of creativity.

Network Rail, now in ownership of the building, seemingly has no official plans for what to do with the building. This is where Loose Space came in.

Loose Space created in the old building a place where people freely expressed themselves, and embraced a connection with others which seems to have disappeared from modern society.

This was not a group of homeless citizens overrunning an empty building, rather a collective of socially aware artists and activists who provided Manchester with something which it had been lacking. A thriving community sprang up in the centre of the city, opening up possibilities for the Mancunian public to get creative and reconnect with eachother.

The Loose Space project was born out of the OK Café model. OK Café started as a protest movement in the mid-90s. The idea being, squat unoccupied buildings for a month to show the public the possibilities of autonomous spaces. They offered the community a bounty of art, music and food, all provided by the collective.

Several prominent members of Loose Space began squatting in the '90s and early '00s with the OK Café and Temporary Autonomous Art (TAA) movements. The project at Cornerhouse was a collaboration of people who were involved with the earlier OK Café and TAA groups.

The group’s experience was evident in the fact that they set up the squat in just a few days. As soon as you walked in, you were greeted with an array of art and poetry. Streamers and wall hangings draped off the wall. The coup de grâce: the beautiful red velvet cinema seats were still in place. The group created a home for themselves, and a spectacle for the public to enjoy.

The squatters also managed to rig up electricity for a full audio set-up, which allowed them to put on free live gigs, truly representing Manchester’s bustling music scene, with events often running long into the early hours of the morning.

I spoke with a few of the organisers of The Cornerhouse squat to find out why they had occupied the old cinema. Names have been changed to protect the identity of the squatters.

“The idea behind the project is the show people what an autonomous space can be like,” Dave, one of the organisers told me.

“This is an anti-Capitalist space, organised outside the boundaries of Capitalism!

“We’re not going to bring down the Government with this project, but we can show the public what a squat actually is. We’re a community of free people!”

Laura, another squatter and member of Loose Space, elaborated on the movement’s motive for the squat: “It’s an experiment. We want to see the diversity, and contrast, of people working together.

“We want people to have an autonomous space to create, so this squat is putting that idea into action.”

Dave explained that they had been thinking about squatting at the Cinema since it had closed down: “We’ve talked about this spot for years.

“We decided to finally squat here as it’s going to be turned into yet another bar, or apartments, which is a shame as the cinema was a much-loved part of Manchester’s culture.

Squats, and protests in general, sometimes get misrepresented in the mainstream media, something the guys in Loose Space brought up. When the story first broke in the Manchester Evening News, it was reported that the old Cornerhouse had been taken over by a group of homeless and ex-homeless people. This, it turned out, wasn't entirely true. In fact, many of the members of the collective have normal jobs.

Laura explained: “The MEN reported that we’re all homeless, or had recently been homeless, which just isn’t true.

“We’re not squatting because we’re homeless. If I ever needed time and space away from the squat, I’ve got a safe space to go to. This is by choice!

“We’re here to create an autonomous space for the public to learn about the culture of squatting.”

While the members of the collective are not homeless, the project is very accommodating to the city’s homeless population. While I was there I saw several familiar faces of those who rough the streets of Manchester.

Dave explained: “With the homeless, we need to check them out before we let them into the space.

“Everyone here works as a collective, so if anyone, homeless or not, is willing to chip in and help out and are chilled, then they are welcome to come in.

“Normally, though, with the homeless, they come in, we give them a cup of tea and have a nice chat, then they usually go on their way.”

The squatters are being evicted from the cinema today, bringing an end to a week-long squat. The general response from the public, however, had been generally positive.

“Everyone has been so supportive of everything that we’re doing,” Laura explained. “HOME are really happy that we’re using the space, Network Rail not so much…

“Even the police have been happy for us to stay, we’ve not really had any issues with them, to be honest. It’s the private security firms, hired by Network Rail, which we’ve been having problems with.”

Last week Manchester was treated to a vibrant space which brought out the best in everyone. Loose Space made Manchester a creative mecca again, all while providing a safe place for Manchester’s most vulnerable to feel at home. Hopefully, Network Rail will continue what Loose Space started and help keep Manchester’s culture thriving. Only time can tell what the company will do with the iconic building.