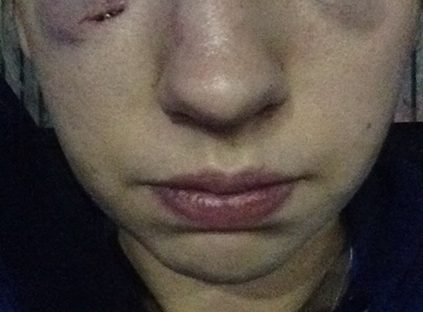 IS THIS THE FACE OF MANCHESTER?

On a girls night out in Manchester catering assistant Hannah Fryer experienced a violent verbal and physical attack.

Twenty-year-old Hannah Fryer was out on a night out at Hula Tiki Lounge when a man got started talking to her in the smoking area.

When he sarted fliting with her she moved away to another group of smokers.

He then verbally abusing her and asking her ‘what my f*****g problem was” before launching a physical assault on her .

Hannah said: “I couldn’t open one of my eyes and my  pupil in that eye wasn’t respond­ing. X-rays showed I had a bad fracture to the top of my nose and my septum had moved.

"I had my head in my hands because it was too hard to watch, I heard loud footsteps so I lifted my head up and the male that had been previously screaming at me hit me extremely hard once. I fell to the floor and as I came back into consciousness there was a pool of blood from my head down to my knees around me, I couldn’t open one of my eyes and my pupil in that eye wasn’t responding.

“I have very limited sense of smell and my breathing is not great, this could take up to 12 months to be back to normal. I would not wish this trauma on anybody, it’s changed me as a person completely.

“The mental damage of this incident is go­ing to be there for a very long time.”

Even though the incident has been horrific for Hannah and her family, Hannah has nothing but praise for the police in dealing with the incident.

She said: “They have been amazing. I have known exactly what stages they are up to in the investigation and updates straight away. They checked all CCTV in the area that night including up to Piccadilly.”

Hannah posted pictures of her injuries on social media such and asking anyone who knows any information from the night to come forward and help her find the attacker. Her posts gained a lot of attention with many people reposting it on their own page or giving love and support to her for going through this incident.

The attack has left Hannah with a negative view of the city.

She said:  “The thought of going into Manchester at this moment in time makes me stomach turn. I feel like there should be more police patrols around Manchester at night, I never see police out unless there is an incident."